I was having one of those days thinking about church vestrys. You know how it is. A childhood assonance still stuck in my head starts repeating – Mill Hill. Irby Mill Hill. Actually I came across an old photo and it set me off, led me onto an old sketch and for old times sake I’ve written stuff here. Below is a photo of Irby Hill Farm (still there) and the tin methodist chapel (long, long gone). Mill lane now runs right through the middle. The old lane off to the left, now a lay by.

The chapel had been built in 1881 at a cost of £130 after the congregation had outgrown the farmhouse kitchen, then owned by a Mr & Mrs Cooke. 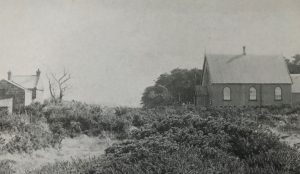 Irby Hill Farm,left, and the tin chapel in 1910

Sacred ground on hill and heath. Early Scout camps were also held at Irby Hall Farm and it is said the first scout campfire was lit here. I don’t know if this is definately true, but it might be. The chapel became too small by the mid 1930’s and in 1936 the present Methodist church was built further along Mill Lane closer to Irby Village.

The tin chapel was demolished and all that remained for many years afterwards was the small vestry at the rear. I sketched the vestry on 15th March 2009 whilst wandering around. It was by then still very much standing, if rather ramshackle. Alas, it was destroyed by strong wind on the night of Friday 15th January 2010 and pulled down. 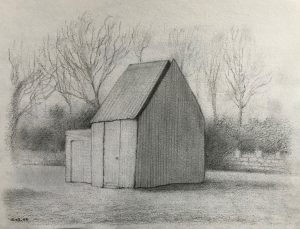 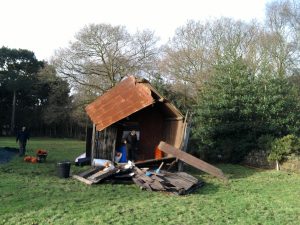